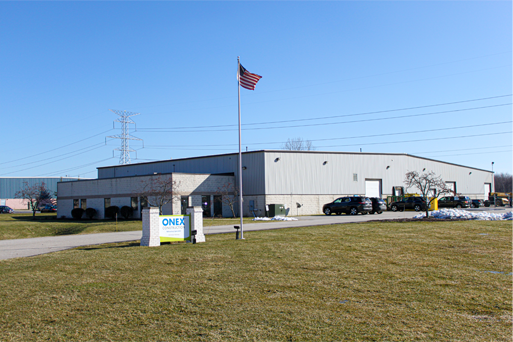 Onex Construction opened its doors as a regional refractory supplier and installer. The company expanded in 1996 to become a global leader in state-of-the-art refractories, high temperature insulations, and engineered solutions for various industrial applications.

Today, Onex construction has become one of the fastest growing, mangers, installers, and suppliers for the Steel, Glass, Aluminum, Petrochemical, Energy, and Cement/Lime industries. We take a hands-on approach from the early stages of project development through commissioning. Our management team has delivered results for over 40 years. 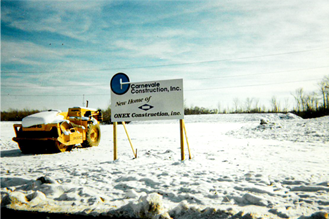 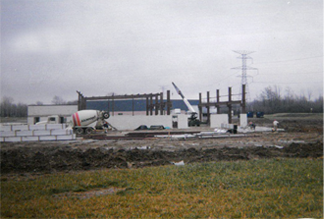 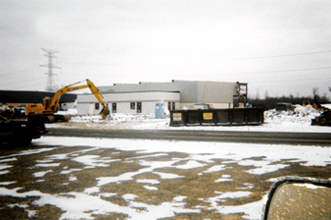 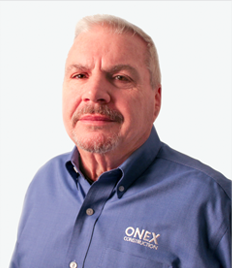 Throughout the years, Onex Construction Inc. has grown from a local specialty refractory installer and supplier to one of the largest global refractory contractors and construction managers. With a strong emphasis on new and innovative technologies, Ken currently offers his input as a board member for the Harbison Walker Network of Certified Installers. Ken currently resides in Aurora, Ohio and is a proud member of Barrington Country Club. Outside of the office, Mr. Finnerty enjoys his favorite hobby which is golf. 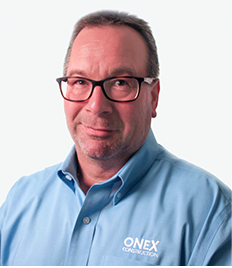 Paul Marshall
Vice President of Operations
Paul Marshall currently oversees the day to day operations of the company. Mr. Marshall began his construction career in Youngstown, Ohio working for the reputable Mike Coates Construction while attending Youngstown State University. Paul obtained a Bachelor of Science in Business Administration degree from Youngstown State University. Upon graduation, Paul stayed in the Construction Industry working as a Project Manager for McGraw in Dayton, Ohio. After relocating to Cleveland, Paul began working for Stevens Engineers and Constructors as a Project Controls Manager. In the early 2000’s, Paul’s expertise in contract negotiations and project financials gained the interest of Onex Construction.

In 2005, Paul joined the company as the Vice President of Operations. In addition to his job title, Mr. Marshall also holds an OSHA 500 Certification and has been an integral part of the company’s safety initiative. Paul and, his wife of 32 years, Michele currently reside in Hudson, Ohio. Together they have raised 4 great kids Erica, Emily, Nicholas, and Bryce. Paul is an active member of the Catholic Youth Organization (CYO) and was recently inducted into the CYO Hall of Fame for his dedication and sacrifice. Outside of work, Paul is an avid Notre Dame sports fan but loves to enjoy his time with this family and 2 Golden Retrievers Kenai and Lucia. 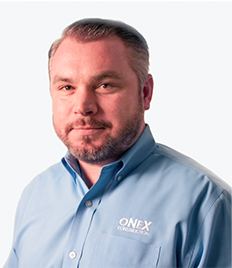 Aaron Smigelski
Director of Projects
Aaron Smigelski currently oversees all Engineering and Preconstruction activities of the company. Aaron started working for Onex Construction as a part time employee while attending Ohio University. At Ohio University, Mr. Smigelski obtained a Bachelor of Science Degree in Industrial Engineering while also being a member of the Division 1 Ohio University Baseball Team. Upon graduation, Aaron began his professional career as a Project Manager at Onex Construction. Aaron would assist the Project Superintendent while maintaining the overall finances of the projects. He is responsible for overseeing project estimates and proposals.

As Director of Projects, Mr. Smigelski and his team of engineers are responsible for identifying risks associated with projects and determining the best and most cost-effective solutions to those risks. Mr. Smigelski currently resides in Aurora, Ohio and is a proud member of Barrington Country Club. Arron is also an avid sports enthusiast. He was inducted into the Nordonia High School Hall of Fame for his athletic achievements and records held in both Football and Baseball. In his free time, Arron enjoys his favorite pastime which is golf. 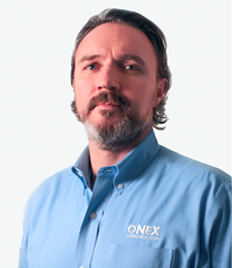 Robert Humphrey
Director of Business
Development
Robert Humphrey has been in the refractory industry for most of his life due to his father’s involvement in the field. Mr. Humphrey serves as the Director of Business Development where he oversees all consumer relations and growth opportunities. Bob obtained a Bachelor of Science Degree from Kent State University. Upon graduation, Bob began his refractory sales career with AP Green now part of Harbison-Walker International. As sales manager, Bob began to understand the properties and advantages to various refractory materials and methods of installation. Mr. Humphrey is always looking to grow the company and gather a larger list of consumers to serve. You will often see Mr. Humphrey at various trade shows and networking events. If you are looking to partner with Onex Construction, Mr. Humphrey will help in any way possible to suit your needs. Bob and his wife Jean reside in Chardon Ohio along with their son and daughter. Outside of the workplace, Bob and his family find peace in the outdoors and enjoy backpacking trips. In addition to the backpacking trips, Bob enjoys spending time with his family at all of his kid’s events. 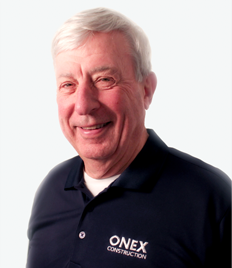 John Stanich
Director of Construction
John has over 40 years of experience in the management of multidiscipline engineering design and construction teams for steel mill developments across the country. To showcase John’s expertise, he has managed new construction and/or upgrades at more than 20 steel mills. John has extensive experience in management of design and construction of wastewater and circulating water treatment systems and mechanical erection. Throughout his career, John has held positions ranging from apprentice to President/CEO. As President of Heavy Highway Industrial for Dick Corporation, John established his team to be one of the most reputable contractors in the country. John obtained a Bachelor of Science in Civil Engineering from the University of Pittsburgh in 1971. As Director of Construction, John is responsible for company growth and preconstruction estimates. John also works with Onex project manager’s to address project planning and work execution plans. John currently resides in Pittsburgh, PA and Charleston, SC. 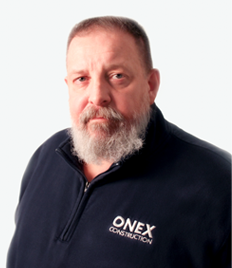 Mike Noonan
Project Manager
Mike began his career as a bricklayer in 1980. Throughout the years Mike has worked his way up the management ladder from Bricklayer Apprentice to a Project Manager. As Project Manager, Mike is responsible for the success of the project from start to finish. He serves as the company liaison at all project meetings and correspondence with the project owner. Mike’s expertise in refractory installation and project supervision can be seen in our project spotlights. In addition to his duties as Project Manager, Mike holds an OSHA 500 certification. As an OSHA 500 certificate holder, Mike serves as an instructor for both OSHA 10 and 30 Hour Courses within the company. On top of his refractory accolades, Mike is also a 14 year Army National Guard Veteran. 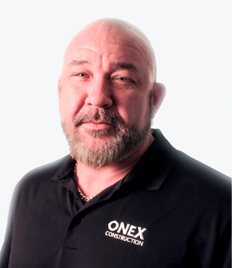 Casey McElroy
Project Manager
Casey started with Onex as a Bricklayer Apprentice in 1998. His leadership skills and attention to detail quickly propelled Casey into a Superintendent position. As superintendent, Casey was responsible for managing all work on-site while ensuring safety and compliance of the project were met. His experience as Superintendent has helped Casey grow and transition into a Project Manager. As Project Manager, Casey is involved in all project stages from proposal to closeout. Casey is responsible for overseeing the execution of contracts and management of project resources in addition to subcontractor performance. Casey’s expertise in refractory and mechanical installation can be seen in our project spotlights. 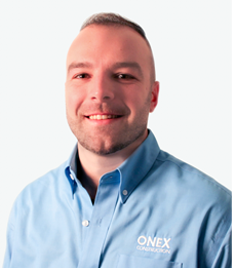 Matt Bury
Project Operations Manager
Matt currently oversees the controls and operations for our industrial and construction management projects. In addition, Matt assists the Vice President of Operations in contract negotiations as well as job cost forecasting. Matt began his career in construction after graduating with a Bachelor of Science degree from John Carroll University. Upon graduation, Matt earned his Leadership in Energy and Environmental Design Certification to better assist with the changing environmental aspects of industrial construction. Matt’s hands-on approach helped him learn the ins and outs of the construction industry. Outside of the workplace, Matt enjoys traveling as well as Notre Dame football. Matt currently resides in Green, Ohio. 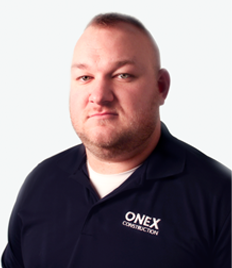 Ryan Berry
Project Manager
Ryan began his career with Onex Construction as a college intern in 2012. As an intern, Ryan was on site and hands on to better learn the refractory industry. Ryan would also assist the project managers with submittals, estimates, and proposals. Ryan went on to obtain a Bachelor of Science Degree in Global Manufacturing System Engineering from the University of Dayton in 2014. Ryan was also a member of the Division 1 University of Dayton Baseball Team. Upon graduation, Ryan transitioned to a Project Engineer where duties included tracking progress, purchasing, and preconstruction estimates. Ryan now serves as a Project Manager where his tasks include the oversight of the assigned project. Ryan assists the Director of Projects in preconstruction activities as well as project reporting and cost tracking. Ryan holds both basic and advanced Primavera P6 certificates. Ryan currently resides in Green, Ohio with his wife Jordan.

Have a project for us?